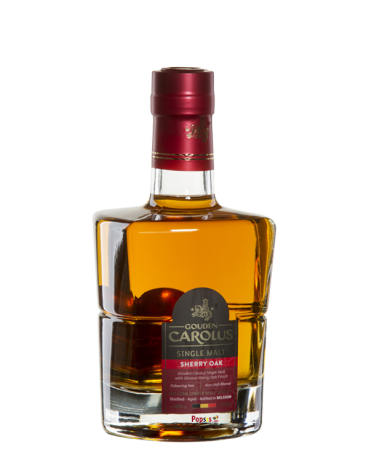 De Molenberg was the first whisky distillery in Belgium to use traditional Scottish pot stills, custom made for this project. A slow process of double distillation of the mash, which is made of malted barley only, produces a top quality distillate, which is then matured in oak casks for at least three years.

Gouden Carolus Single Malt Sherry Oak is also distilled from the Gouden Carolus Tripel mash. After an initial maturation in first fill bourbon casks and in house casks, it is aged in American oak Oloroso* sherry casks. This slow aging process in a variety of containers gives it a unique intensity and a complex aromatic bouquet of ripe fruit, vanilla and dark chocolate. This exceptional whisky is best enjoyed at room temperature (21°C).

* Oloroso sherry is aged without veil and is fully oxidised, unlike other types of sherry (jerez in Spanish, sherry in English).