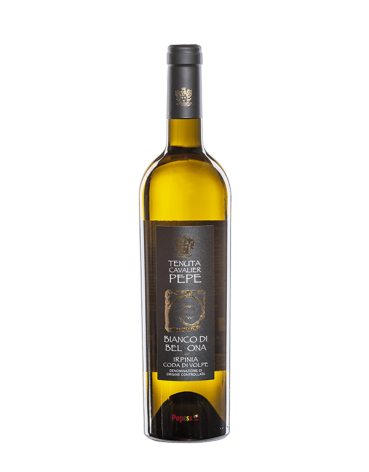 Milena Pepe was born and raised in Belgium, but after studying marketing in Brussels and further training in viticulture and oenology in Provence and Burgundy, she moved to the region of Irpinia, in Campania, where her paternal family has its roots. Her father Angelo, a well-known restaurateur in the capital, entrusted her with the management of the family estate Tenuta Cavalier Pepe: 60 hectares of vines (for approximately 400,000 bottles of wine produced annually) and 12 hectares of olive trees. Focusing on indigenous grape varieties such as Greco di Tufo, Fiano di Avelino and Aglianico, Tenuta Cavalier Pepe produces an extremely wide range of wines from which Popsss has selected his favourites.

Bianco di Bellona is dedicated to the Roman goddess of war. Legend says that she liked to celebrate successes in battles by sharing a great deal of wine with her troops.

Grapes are harvested in mid-October, sorted in the vineyard ant the cellar, and then pressed whole. Cold settling is followed by alcoholic fermentation at low temperatures. The wine is aged for a short time on its fine lees before bottling.

Intense, with a very good length.

Accompanies sushi and fish tartars as well as buffalo mozzarella or burrata.