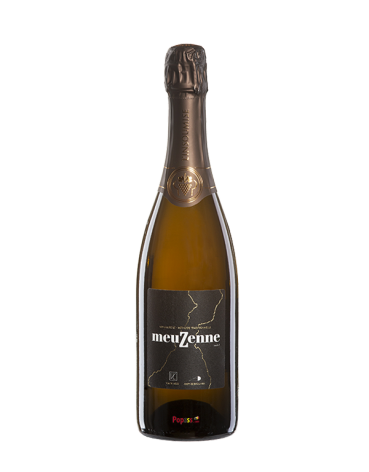 Perfect as an aperitif.

Vin de Liège has masterfully demonstrated that it is possible to combine social purpose and economic profitability. Its cooperative model has also been emulated by the Walloon neo-vinegrowers, from Herve to Tubize. Vin de Liège has chosen interspecific grape varieties, the surface area currently planted being 16.3 hectares, with a subsoil of clayey or sandy limestone depending on the plot. The cellar, which is underground, allows gravity-fed work and blends beautifully into its environment. The estate is certified organic.

This sparkling wine is the result of the partnership between Andy De Brouwer, owner and daring sommelier of the restaurant Les Éleveurs in Halle, and Vin de Liège. It is the result of a blend between a lambic beer produced in the Zenne (or Senne in French) valley by the Den Herberg brewery and the "clear wine" used to produce L'Insoumise, the crémant of Vin de Liège. Hence the name MeuZenne, the fruit of the contraction between Meuse and Zenne.

The two products are blended before bottling, in which the second fermentation is carried out (traditional method). The MeuZenne is then aged on lees for 9 months.