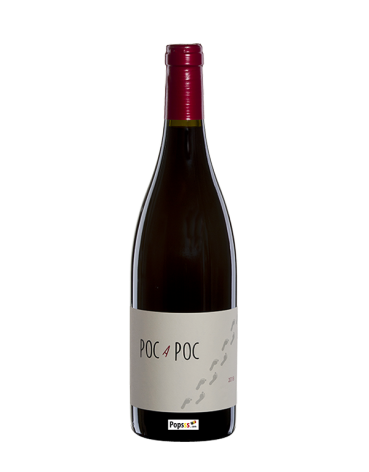 Established in Paziols, in Cathar country (Roussillon), Xavier Ponsart cultivates three hectares of vines split between several plots on clayey-limestone and schist soils. He works them by hand (using a brush cutter, a motorised cultivator and a horse on the steepest plots), with the aim of producing wines without artifice. The average age of the vines is 70 years old for both whites and reds (40 years for the Syrah). Yields vary between 8 and 18 hl/ha. Little by little (poc a poc in Catalan), this young Belgian is establishing his reputation as a winegrower without concession.

This is a natural wine as we like it, without any of those deviances that some people present as miraculous virtues. Here we are as close as possible to the expression of the grape and that's all... Xavier works with indigenous yeasts, without any input, and sulphites only a little bit during bottling. His wines are not filtered either, which can lead to a slight deposit.

Hand-picking in crates, with sorting in the vineyard. Vinification by plot. Fermentation spread over 10 days to 3 weeks. Light pumping over, without punching down the cap. Ageing in used oak barrels (3 to 6 wines) for six months (for 20% of the volume) and in fibreglass vats (for the remaining 80%).

Nose of blackberries, blueberries and redcurrants.

It is a wine for sharing, for summer evenings with friends, around a nice piece of meat.

16-17 °C. The wine is best decanted several hours in advance.